To understand what this term means, and why it matters, one has to look at the DC Code. To propose a moratorium, the Code requires petitioners decide whether to propose a moratorium for a locality, section, or portion of the District. These terms refer the areas within a circle with a radius of 600, 1200, or 1800 feet, respectively. Next, petitioners have to choose an establishment to be the center of their proposed moratorium zone, and then demonstrate that the area they have selected meets certain requirements for the petition to be considered by the ABRA board. To reiterate, these are just some of the basic requirements that must be met before one can argue the merits of a liquor license moratorium. It seems that this is the section of the law that confuses SDCA board members: they have repeatedly claimed that 18 liquor licenses in a portion of the city, the legally required minimum number for ABRA to even accept a moratorium petition for review, is instead the legal definition of  “overconcentration”. They also seem to be under the impression that, having passed this imaginary threshold, ABRA has reason to approve their petition.

According to ABRA, a moratorium petition is only approved if it meets the basic requirements, and the board determines it to be appropriate based on at least two of the following three factors (DC Code § 25-3l3(b)):

1) The effect of the establishment on real property values;

2) The effect of the establishment on peace, order, and quiet, including the noise and litter provisions;

3) The effect of the establishment on residential parking needs and vehicular and pedestrian safety.

Overconcentration is not listed. The term appears in other parts of the DC Code, but the definition of overconcentration itself refers to the three factors already listed: “‘Overconcentration’ means the existence of several licensed establishments that adversely affect a specific locality, section, or portion of the District of Columbia, including consideration of the appropriateness standards under § 25-3l3(b).” It should be noted here that the Code offers no numerical definition of overconcentration, and the term is, once again, unrelated to the moratorium review process.
SDCA board members continue to provide inaccurate information to ANCs about overconcentration even though Elwyn Ferris, Chair of SDCA’s ABRA Committee, explained the actual, correct definition at their February 21st meeting. In fact, the meeting minutes include a verbatim definition from the code, exactly as I provided above. Guy Podgornik, along with other board members, attended this meeting before making his presentation to ANC 2F.
This isn’t the first time that the SDCA has spread misinformation. The SDCA originally claimed in their petition that U Street has the highest concentration of liquor licenses in the District, but I have since pointed out that this is a misconception due to a basic math error on their part. Since then, I haven’t heard that claim made in public, and perhaps this is why they’re using the (also incorrect) “legal definition of overconcentration” argument.

Two small advocacy groups, the Residential Action Coalition and the Shaw Dupont Citizens Alliance, recently filed a petition to create a large liquor license moratorium zone centered around Ben’s Chili Bowl on U Street. In response, I founded In My Backyard—DC, a broad coalition of District residents who oppose the proposed moratorium and NIMBYism generally. There’s a lot more at stake here than the number of liquor licenses in the proposed zone. A moratorium would free up NIMBYs’ resources to attack new development in DC while failing to address the concerns raised by the moratorium advocates.

IMBYdc currently has over 500 members and is in the process of creating an executive board. Members from all over DC have joined, though our current membership is primarily concentrated between Columbia Heights and Logan Circle. The initial response to the group has been overwhelming, and I’ve had the opportunity to speak with both longtime and new residents in the proposed moratorium zone. 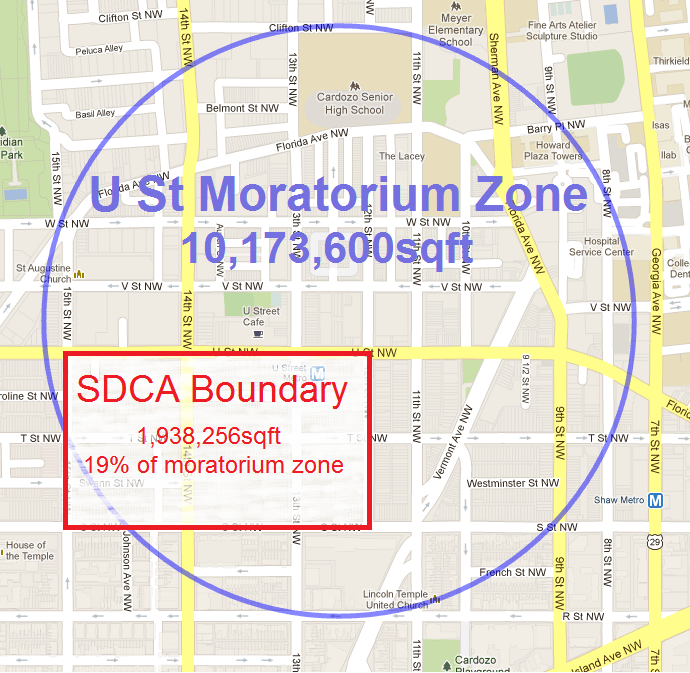 Shaw-Dupont Citizens Alliance, in contrast, limits membership to those who live in a two by four block rectangle south of U Street. In fact, their borders exclude people who live in 81% of the proposed moratorium zone from joining as voting members. Residential Action Coalition, which doesn’t have a website, has an unknown membership. The group’s president, Kay Eckles, is well-known for her activism and litigation efforts to stop new buildings. In one notable case she contended “that the height of [a] 12-story Metropolitan Square building would pose a security threat to the White House.” Both groups are opposed to greater population density and to new businesses that fall outside of their visions for the neighborhood.

The petition signed by Ms. Eckles and her counterpart at SDCA, Joan Sterling, makes several allegations about the U Street corridor to support the moratorium. First, and most obviously false, they claim that proposed moratorium zone has the highest concentration of liquor licenses in the District. They also compiled a long list of quality of life issues related to liquor licenses. My personal favorites are sexual activity, “honking battles,” and the development of “carry-out pizza by-the-slice businesses.” Eckles and Sterling also contend that the growth of liquor licenses in the area have brought higher crime, but this graphic from Nick Baumann’s blog demonstrates that crime rates have in fact gone down with new development.

The petition paints a picture of U Street that I don’t recognize, but it raises an important question: Would a liquor license moratorium address any of these alleged problems? Nearly all of the nuisances listed in the petition, selling pizza excepted, are either violations of city laws or codes that would need to be addressed by police or regulators. Supporters of the moratorium say that preventing new licenses will stop U Street from becoming Adams Morgan, but Adams Morgan, which has had a moratorium since 2008, demonstrates that a moratorium cannot prevent drunken behavior and related crimes.

The proposed moratorium should be judged by the likely consequences of its implementation rather than these stated goals.

Under the current regulatory framework NIMBYs have to fight each and every business that attempts to open, and they have limited time and money to do so. The main consequence of the moratorium would be that it frees up resources for a very specific NIMBY group to oppose developments of all kinds across the District. In fact, the Shaw-Dupont Citizens Alliance was formed specifically to oppose the new apartments at 13th and U Streets, with the moratorium as a secondary goal.

A liquor license moratorium would also transfer power from ANC commissioners to unelected activists. Current law allows an abutting property owner, a group of as few a five property owners, an incorporated citizens association, or the DC Metropolitan Police Department to file a protest that almost always leads to months-long negotiations with a liquor license applicant and the relevant ANC. This is a robust system for community input that already allows protestants to block many new businesses. It’s worth noting that SDCA board member Dan Wittels ran for ANC1B12 Commissioner, but fewer than 11% of his neighbors voted for him, indicating they do not share his vision for the neighborhood.

Not only do their board members have an interesting history of stringent NIMBYism, but SDCA has opposed every single development that has come to a vote in a meeting. This includes Taco Nacional, Ted’s Bulletin, the PUD and the amended PUD for the JBG development on 13th & U, and Compass Rose. They also opposed the ABRA reforms that would stop DC residents from filing liquor license protests against businesses that they don’t actually live near.